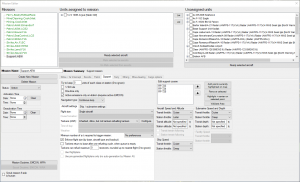 NOTE : Some of these may look slightly different than the CMO screens.

The Mission Editor is where you will complete the details of your missions. You can assign units, add targets, patrol areas, prosecution areas, and generally determine how a certain portion of the battle is fought. A mission is a specific container where units will follow a special set of your requirements. Different missions will display different options so each particular mission will be laid out completely below. EMCON and WRA will be covered elsewhere.

Patrol Missions are one of the most common type of mission that you will use. The AI can normally be trusted to execute the mission better than you, the player, can micromanage it. Especially essential for large scenarios. But, if set incorrectly, can lead to frustration. Setting patrol areas, prosecution areas, and proper WRA / EMCON will ensure the patrol runs smoothly.

To create a patrol you must have at least one reference point.

Many of the options are the same for different patrol types. The AAW Patrol section will detail each option while subsequent entries for other patrols will only note the differences. 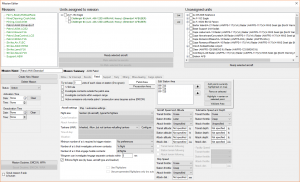 The Anti Air Warfare patrol mission is one of the most common mission types. It will require at least one reference point to be selected upon creation. Additional reference points can be added later or a prosecution area may be defined. This mission will task the units assigned to it with attacking air units. Typically aircraft are assigned to this, but you may also add SAM's and AAA to there own AAW missions.

In this section define Reference Points for the Patrol Area.

You may define Reference Points for a Prosecution Area.

Units assigned to an ASuW Patrol (Ground) will only engage ground targets. This includes anything that is not a submarine, vessel, or aircraft. Facilities, vehicles, radar, and SAM systems are all valid targets. Should an ASuw Patrol (Ground) overlap a hostile Naval vessel the units may not engage.

Units assigned to an ASuW Patrol (Mixed) will investigate any surface target within the defined patrol area. This includes everything except air units and submerged submarines.

An Anti submarine warfare patrol will use sonobuoys, sensors (depending on EMCON), and dipping sonar to find sub surface contacts. They may engage depending on WRA. Or they may find whales.

Suppression of Enemy Air Defense patrols will prioritize strikes on air defense systems such as SAM's, AAA, or radar.

A Sea Control Patrol combines an ASW and ASuw (Naval) Patrol. It offers less control than specified missions but this may be fine depending on your demands.

Strike Missions differ from patrols in that you need to define targets in order for the mission to proceed. In some cases you can launch the mission manually, move the aircaft to a staging area, and then assign targets as detected. You may also assign an unknown contact to the target list but set the mission to trigger if it goes hostile or unfriendly. You may also define an escort for your strike aircraft that will attempt to protect the strike package.

Land and Naval Strikes function differently than air strikes as an entire strike package may be assembled and the strike AI will coordinate them. You can assign strikers (which will follow WRA), SEAD assets, fighter escort, and even recon assets. A specific mission plan is generated by the strike AI to match the mission profile. 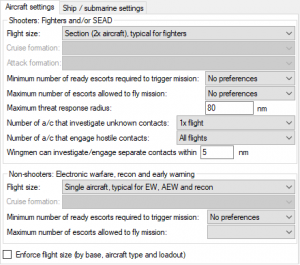 Escorts includes any unit that is attached to the mission that isn't striking the defined target. This may include SEAD loadouts, recon units, and fighters. The settings are broken down between shooters and non-shooters. For shooters you have similar settings to what the strike mission uses. Non-shooters allows for a single aircraft as you may only want a single electronic warfare or recon unit with the strike.

It's essential you define your escort and support craft by checking the box and clicking Mark selected as escorts.

A land strike mission will send a group of units and attack the defined target. It is still subject to WRA and EMCON.

Land, ASW, and ASuW strike missions are all unique in that a complete mission profile is generated. If you attach SEAD they will perform a specialized SEAD role before the strike package goes in. This isn't perfect and you may need to intervene to prevent a catastrophe. By clicking on one of your strikers it is possible to see the, and adjust, the flight path of the mission. 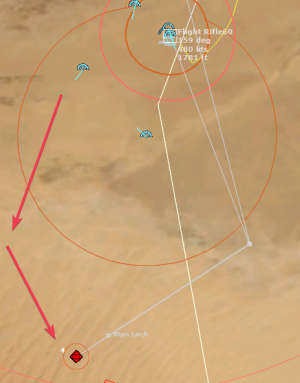 In the above example all aircraft take off at once, the SEAD aircraft fire anti-radiation missiles, the strikers move in next to attack, with the fighters covering from air threats. The final aircraft into the strike is the recon unit. Very complex strike missions may require multiple strike missions on a variety of targets to ensure that SEAD is properly performed. For simple to moderate complexity strikes the Strike Mission AI is quite capable. 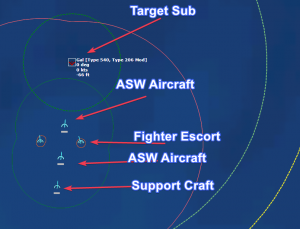 An ASW strike will send out units to attack a submarine asset. In the above example a pair of ASW aircraft leads the way with fighter escort close behind. A second wing of strike aircraft is behind that followed up by an AEW bird. To say it again, this is all generated by the strike AI, all I have done is assigned units a target and set some as escorts. 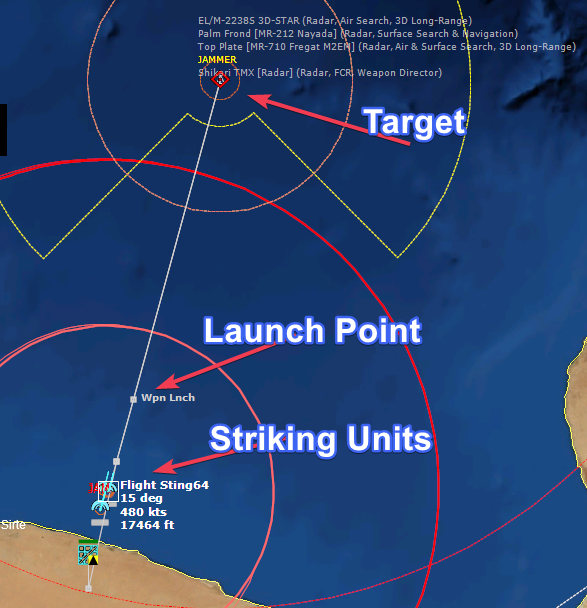 Maritime ASuW Strike follow the same guidelines as above except it is against naval targets. In the above example a flight of Chinese J-16 Flying Sharks will launch anti-ship missiles at a passing F47 frigate. Assisting the Chinese air units is a pair of JD-16's mounting OECM. 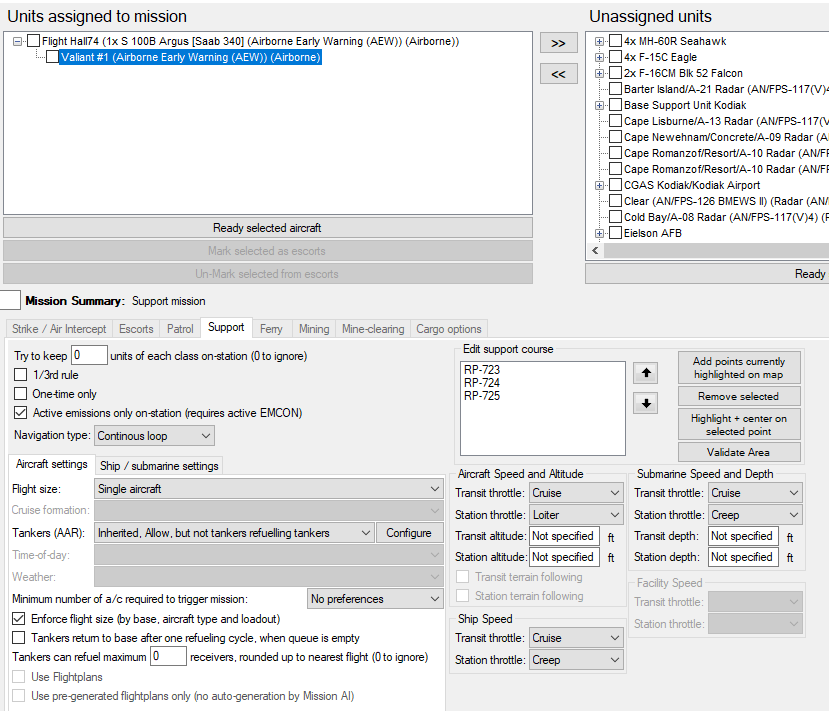 A support mission is unique in that no target is being attacked. They are used as paths for airborne early warning aircraft, refueling operations, OECM and even as holding points for aircraft waiting to be assigned to missions. Many of the options are the same as patrol missions.

When creating a ferry mission you must select the destination port/airfield. You may also set it as a one-way trip, random, or cycle back and forth. Flight size will default to 4 aircraft, and the aircraft will take the shortest direct route to their destination. Wiki note : If you are familiar with the use of this operation please expand upon this entry.