GT:MF is computer game that models, mostly, WW2 conflict simulation at the operational and tactical level. These simulations are packaged as Campaigns and are sold as DLC to the core game. A typical Campaign will focus on a window of time, typically measured in days, and the fight for area control during that time. The set piece is researched to be as close to historical records as is feasible with accurate OOBs. 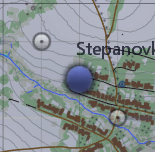 It is then up to the player to manage this conflict by holding Key Points on the map. A Player will be tasked with controlling the front lines of an operation and the supply chain that keeps it operational. The key to a successful Campaign is managing this operational phase stage of the game so that logistics and supply work smoothly. Units will fatigue, fuel will run low and ammo will run out so careful management of your units is a necessity. Analyze the terrain and have the right units in the right place at the right time.

When an actual engagement occurs the player will need to manage a battalion in tactical 3D combat. The focus will then shift to an area of the map being contested and the units that will take part. Depending on posture the player can setup a defensive or offensive plan. Taking care to look for LOS and LOF are critical to this stage of planning. Commanders need to be placed so they support their troops. An engagement is very often won at the outset based on the deployment.

Once bullets start firing the player must take care in issuing any further commands to their troops as there is a cost. Flooding or severing communication channels is a quick way to lose control of your units. Communication must be kept effective or the plans will break down. Unit integrity can be managed and supported throughout an engagement creating some heroic displays.

There is so much detail to cover in GT:MF that it can feel overwhelming. The common advice when playing a campaign is to pick and choose your battles as much as possible. If the conditions are not favorable withdraw from combat. Live to fight another battle where the conditions are in your favor. Scout front lines and reveal what your opponent has in store for you. Try not to exhaust ammo or troops as operations are often long and their management is vital to success.

Once the player has a firm grasp of the Operational and Tactical systems they will be able to control areas of the map. Control is exerted from units on the map based on their Force strength. This strength can force your opponent out of areas so the concentration of units is important. Balance the concentration of units to move the front lines where you want them to go. Don't over extend your front lines causing units to get encircled.

Finding the right balance and managing a long successful campaign is where the true rewards come from GT:MF but this can take a very long time to become competent. The more players persevere with the game the more they can see the magnificence that has been developed by the GT:MF team.