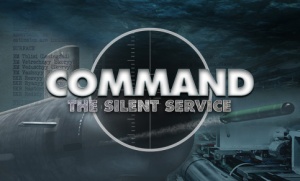 Command: The Silent Service (TSS) is a standalone expansion for Command: Modern Air/Naval Operations focusing on submarine operations from the 1950's to the late 2010's. The expansion consists of eighteen scenarios (12 with unrelated storylines and 6 with storyline linked to a hypothetical World War 3 in 1985).

Command a modern Russian nuclear ballistic missile submarine (SSBN) and conduct a simulated missile launch against a target in the Kamchatka peninsula.

Recreate the daring mission undertaken by HMS Swiftsure to photograph the screw of the Soviet V/STOL carrier Kiev. Actual photograph of the Kiev's screw taken from HMS Swiftsure

Infiltrate Soviet waters in the midst of a large air defence exercise in order to obtain emission recordings of a new Soviet fire control radar.

Take command of the USS Seawolf (SSN 21) and track down a rogue Russian SSBN crew before they are able to launch missiles against the United States.

Deliver Indian special forces operatives into the Pakistani port of Karachi, one of the worlds busiest trade hubs

Take on a powerful surface group with your choice of either the USS Razorback--a GUPPY class diesel submarine--or the revolutionary USS Nautilus, the worlds first nuclear powered attack submarine.

Retrieve the device that US Naval Intelligence dubbed 'the Crown Jewels'; a cable-tap placed on a submarine communications cable near the Barents sea port of Severomorsk.

Track, intercept and destroy a shipment of arms destined for North Korea during the Korean war

Command over a dozen NATO submarines to stem the tide of Soviet submarines attempting to break through the GIUK gap in the opening hours of World War 3. More information.

Covertly insert a SEAL team by swimmer delivery vehicle (SDV) into Cam Ranh Bay in Vietnam to destroy Soviet capital ships at anchor and dissuade Vietnam from opening a new front in the Pacific.