This is a Lua framework that is used to play CMO as PBEM (play by email). It was created by musurca. More information can be found at the [Matrix Forums].

You load either a pre-made IKE scenario or modify one of your own. You may play in continuous mode for your turn or in command limited mode. Turn length and quantity of turns are defined at the start of a scenario. IKE also :

IKE comes with pre-made scenarios that require no Editor work on your part. Simply load them up as you would any other scenario.

First download IKE from the [link posted] on the Matrix Forums. Extract this into your CMO scenario folder. Then load CMO and start a new scenario.

You will then get asked a series of questions. If in doubt just use the recommended settings. 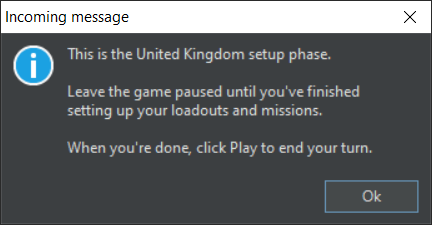 Once you click OK you enter the scenario and give your orders as usual. The first turn is usually a Setup Phase, in which you'll be able to set up your initial orders and missions while the game is paused. However, once you start time, your first turn will be over--so don't click play until you have given all of your initial orders. 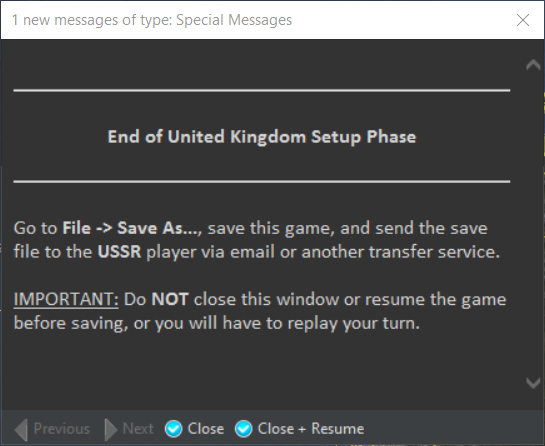 At this point Save-As your game and use a clever name that is descriptive. Something like Duelists.Setup.UK or other such name. This will be useful later once you are a dozen turns in. Now email or exchange the file via something like Discord. Then the USSR player will open it, define his password, and enters the setup phase.

Then begins the back and forth. Follow the instructions that IKE displays. Depending on the scenario turn length, and command phases, you will get several opportunities to give orders. Once you have given your orders in each phase you will observe until the next orders phase. At the end of your orders phase your turn is complete and you will send the turn to your opponent. You will get a summary of losses when your opponent sends his turn back to you.