Welcome to Command : Modern Air Naval Operations. This guide is meant to help the first time player become familiar with the game.

The first thing a new player should do is to play through the Strike Tutorials.

If you have a campaign pack only, for example Northern Inferno, your scenario selection screen may look slightly different. The main game includes scenarios and allows you to make your own scenarios (along with Steam community created scenarios). The campaign packs are thematic packs of missions that stand alone. If you own both you can play the campaigns in the main game, however if you only have the campaign packs you won't be able to access all content. 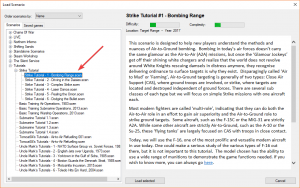 Special Tip : You can play campaign missions using the Scenario browser. When playing as a "campaign" you can't advance to the next mission until you complete the previous one. So, if your stuck, or see one that catches your eye, just load it up as a scenario instead.

The difficulty and complexity values are set by the scenario author. One persons low difficulty-low complexity may be extraordinarily difficult to someone else. 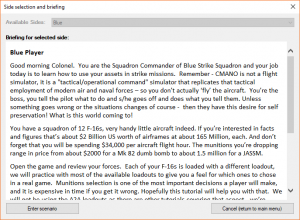 For certain missions you can play as different sides. In this case it is locked to Blue. Below it is a briefing that will lay out the mission background and context. 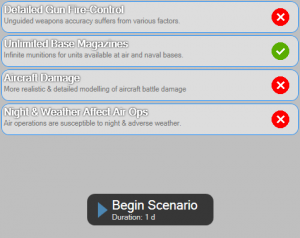 Some scenarios allow you to select different realism levels. In this case we have unlimited magazines (re-arms) and detailed fire control and damage is off. Click Begin Scenario.

You should now see something that looks like Google Earth with some icons, squares, white X's, and other unique things. We'll run it down from the top and give you an idea of what you're looking at.

The top bar gives you links to different game functions and menus. Certain menu items, like Contacts will be highlighted depending on what you have selected. Beneath that is a drop down menu for Time Compression which changes how quickly the game time moves. To the right of that is Time Mode, leave this on No-pulse. Further right is the main button, Start / Resume which, you guessed it, makes the game start! You can always pause it, make orders, and start it again at your leisure.

The black bar shows you the time, local time, duration of the scenario and your camera altitude.

Hovering your mouse over the terrain on the map will give you some details. First position, next distance from whatever it is you have selected and then the elevation. Then it's slope, local time (useful if you're planning ops across the globe) and finally weather. 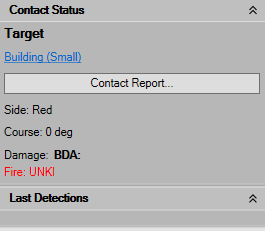 If you click one of the red icons on the screen you will get information on that contact. The better information you have on the contact will inform you of things like damage and capabilities. Clicking the blue link, in this example Building (Small) will bring up the database viewer and show you altogether more information than you need right now.

The red icon (red means hostile) with an M on it is a mobile unit, in this case a car. The line coming out of the top shows the vector of the unit. Clicking on it displays vector in degrees and speed in knots. 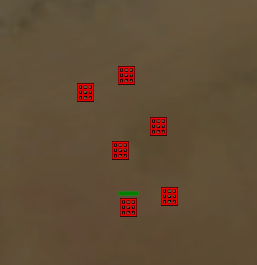 The waffle looking icon denotes a building. If it contains a unit, say an aircraft inside of a hangar, you'll see a yellow square on it. Above one of the buildings is a green bar, so you have some intel on its condition.

These are a platoon of armor. The orange ring denotes how far the land weapons it contains may shoot.

Reference Points, when selected are shown as a yellow diamond. Unselected reference points are a white-x. You use these to set flight paths, mission boundaries, prosecution areas, and all sorts of stuff. Very useful and very helpful. Tip : Press CTL-END to deselect all reference points 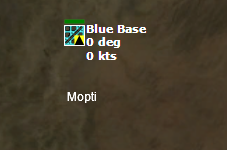 Lastly we have our airbase. We have a green health bar on top along with a yellow icon denoting it contains units. This is a special airfield unit with everything contained in it. In some scenarios your airfield is modeled after real world layout and design. Remember that when planning strikes in the future. 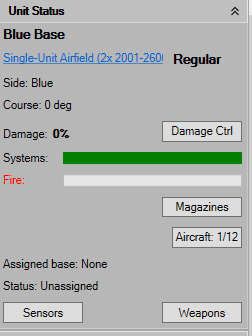 The unit status on the upper right looks different for friendly units. We're not going to cover everything right now. You can click Damage Ctrl, Magazines, and any other button and see a bunch of information. Beneath that is your unit EMCON and doctrine. These variables control exactly how your unit will operate, engage, and defend. 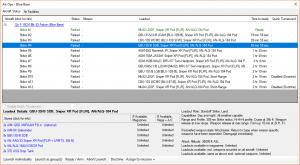 The green aircraft is the only plane that is ready. The others are all being reloaded or refueled. This will show you each of your units, the current loadouts, and what roles they are capable of. Pay attention to things like capabilities, as this will define weather and daylight requirements. Most modern systems can fire day, night, wet, or dry. Older iron bombs need clear weather and day light. The strike radius is also listed, certain bomb loadouts can fly farther than others.

For the moment close this and we'll let the tutorial run for a bit. Click Start / Resume.

Right now we're in real time. One actual second equals one in game second. After 15 seconds a special message will pop up. You'll see these often as a tool to give you information, make choices, and as a tool to learn of new contacts, weapons and losses. It is also displayed in the message log. 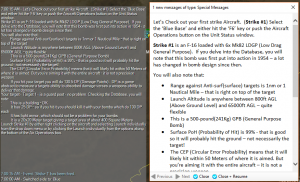 This message does a great job of detailing what can be seen in the Database Viewer. It is always a good idea to browse a loadout and weapon type to make sure it's doing what you want. Some weapons can be released at a safe distance far from a target while others, like this bomb, require you to fly right over it.

Now start time again. If you want to speed time up a bit bring the time compression up to 5 seconds. 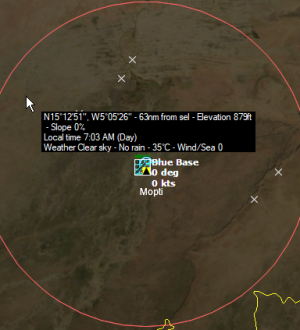 Once Strike #1 takes off it will go into a holding pattern. The red circle you see is the range of the Surface weapons, think Air to air missile. If you zoom right on top of the unit you'll eventually see a tiny orange circle, your land weapons range. The aircraft will happily circle the air base awaiting orders.

At 7:04 you'll see another message instructing you on how to attack the target. This is an automatic attack, you can also do a manual attack, patrol mission, or strike, but for now follow the tutorial. Select Strike #1, press F1, then click on Target #1.

Strike #1 will go to attack altitude at cruise speed. The status will become Engaged Offensive. All of this is in the unit status bar on the right.

It's worth noting that in CMANO the units will follow attack guidelines you have set but also preserve themselves. Should a missile be fired at them they will attempt to evade it.

Once Strike #1 is close zoom in on Target #1. Notice that Strike #1 has increased speed to 520 knots. It's going in on the attack run. Different weapons have different attack profiles. Sow down your time to real time again so we can watch the bombs fly. 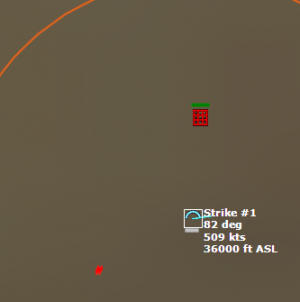 When Strike #1 is almost to the target it will release the bombs and exit the area. You can see the red icons denoting our ordnance. Other weapons, like missiles, will have a different icon.

Once Strike #1 has dropped all of ordnance the aircraft will drop the target and RTB (return to base). You can set different WRA (weapons release authorizations) that can conserve ammo, split ammo into more targets, or engage strafing, but that's a more advanced topic. 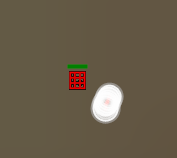 Whoops. Strike #1 blew up a lot of dirt. Some weapons toss up splash damage or fire, so it's not always necessary to precisely strike the target. You can improve the accuracy of iron bombs by flowing lower and slower, but now you're much easier to hit with AAA and SAM's.

At 07:21 a message will pop up and explain why our iron bombs missed and what we'll do about it. Mainly use a guided bomb. Go ahead and launch Strike #2.

At 07:23:30 another message will pop up and explain a manual weapons release. 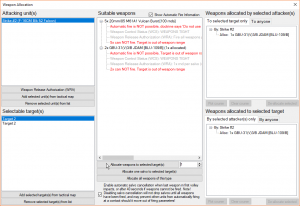 The manual weapons release will allow us to define exactly which weapons we want to strike with. We can also see what other aircraft are striking with by selecting the By Anyone tab on the right. This menu is also very useful to determine why something isn't firing on a target. It'll tell you if your altitude is wrong, or the weather is bad, or if the weapon isn't the proper type for that target.

At 7:28:45 you'll get a message describing RTB and range circles. You can add or remove range data as needed to reduce clutter. 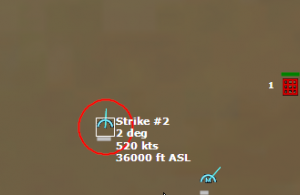 Bombs away! Since this is a guided munition we get a bit more data when it is launched. You can click it and watch it drop. You'll also see a target line showing where it's going. The #1 next to the target shows that it has a weapon allocated to it.

At 7:41 you'll get another message about penetration and impact. Hopefully both of your JDAM's struck home.

At 7:47 you'll get a message. Now we'll adjust doctrine a bit. Follow the instructions and begin your attack.

Doctrine can be defined for a single unit, a mission, or even the entire side. This allows you to set one unit to have live Radar while other units may be cold. Or maybe you want some units to strafe while others remain high in the sky.

After Strike #3 has launched the CBU's on the tanks you'll want to U unassign the unit (it was RTB'ing) and manually set it to strafe the remaining tanks.

It will only strafe if it has a good target position. Strike #3 may only fire once or twice before RTB'ing with bingo fuel.

At 7:52 we'll get a message about Strike #4. You'll uses SDB's to destroy the 6 small buildings. These bombs, while smaller, are extraordinarily accurate due to GPS packaging and glide capabilities.

A message at 8:09:35 will describe a different guided munition and task you with attacking some moving vehicles. Strike #4 should be headed towards the target complex. Strike #5 (the Maverick bird) won't be ready until 08:30.

If all goes well you'll see a spider web of SDB's raining doom upon a bunch of buildings. 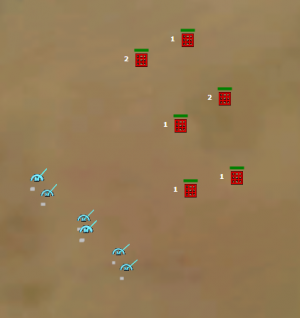 Some buildings have one bomb allocated, others two, hence the #1 and #2 next to some buildings. SDB's are really cool to use. 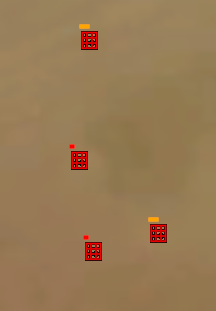 Some buildings have survived, though all have damage. Damage requires a degree of intel so it is possible to drop bombs on a target and not know if it was actually destroyed, or by how much.

At 0830 launch Strike #5. Task it to attack the mobile targets using the Maverick missiles.

Once Strike #6 has launched select it and press F3. Then click on a point past Target #2. This sets a course for your plane to fly. By pressing F2 you can manually change the altitude and speed. Normally you can trust the plane to fly the most efficient route but sometimes it's worth doing it yourself.

The JASSM's are special. You now have the ability to plot a course for them. Follow the description on how to attack with Strike #6. 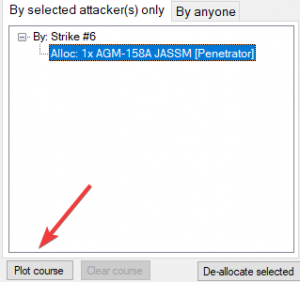 If your range is too far you will need to get closer before you can plot your course.

This flight uses a decoy. But instead of using Shift-F1 you'll use CTL-F1 for a Bearing Only Launch. Now the hostiles might think another flight of aircraft are inbound and fight them, and not you!

That is the final official flight for this tutorial. It is highly recommended to follow through each of the strike tutorials before moving on the the naval tutorials. Beyond that the Northern Inferno missions are a great starting point as well as the smaller scenarios that come with the base game.

Check out the guide overview for more guides.